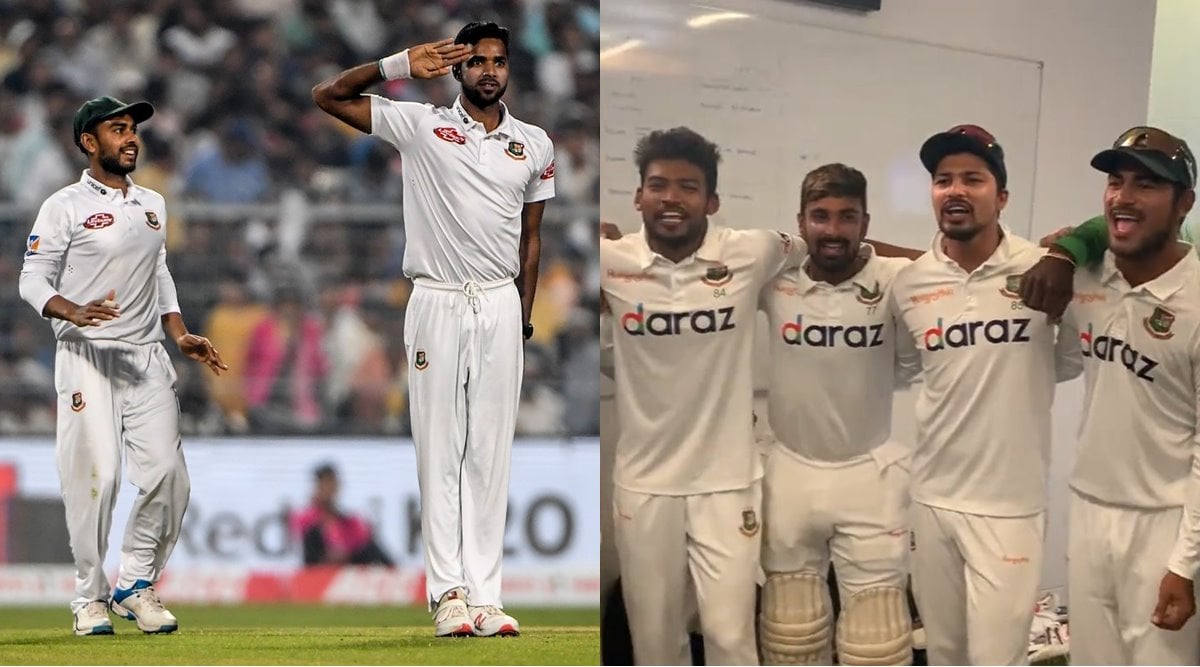 Fast bowler Ibadat Hossain gave a strong performance against New Zealand. He scripted his team’s victory by taking 6 wickets in New Zealand’s second innings. He also won everyone’s heart after the match with his post-match comment off the field.

The day of January 5, 2022 will be recorded in golden letters in the cricket history of Bangladesh. Bangladesh team defeated New Zealand in a test match for the first time. After this spectacular victory, Bangladeshi players celebrated fiercely in the dressing room. The players celebrated a lot by putting their hands around each other’s necks. Bangladesh Cricket Board (BCB) has also shared the video of this celebration on its social media handles.

The caption of the video posted by BCB read, ‘Bangladesh team dressing room celebration after victory in Mount Maunganui. In this video, Bangladeshi players are singing the Bengali version of ‘Hum Honge Kaamyaab’.

Fast bowler Ibadat Hossain gave a strong performance against New Zealand. He scripted his team’s victory by taking 6 wickets in New Zealand’s second innings. He also won everyone’s heart after the match with his post-match comment off the field.

He said, ‘This time we had set a target. We came forward and said that we have to beat New Zealand on their soil. And we can do that. They are Test champions, but if we can beat them then our next generation will take inspiration from it.

Ibadat credits his military background for saluting every wicket he takes. He said, ‘I am a soldier of Bangladeshi Air Force. I know how to salute. Cricket from Volleyball. I am enjoying cricket, playing for Bangladesh and being a part of the Air Force.

Let us inform that Ibadat Hussain joined the Air Force of his country as a volleyball player at the age of 18. At the age of 22, he got recognition as a bowler. He made his Test debut at the age of 25. However, he did not have much success then. Now at the age of 27, he gave his team a historic victory by taking 6 wickets for 46 runs.

This is the best performance of Ibadat’s career. Thanks to his performance, Bangladesh beat world Test champions New Zealand by 8 wickets in the first cricket Test to register their first win over them. The prayer had brought Bangladesh close to a historic victory on the fourth day itself.

He also took New Zealand’s last two wickets on the fifth and last day on Wednesday. The hosts were bowled out for 169 in the second innings, their lowest score against Bangladesh.

New Zealand were trailing by 130 runs in the first innings. Due to this Bangladesh had to score 40 runs to win. He lost two wickets, but captain Mominul Haque and former captain Mushfiqur Rahim took the team to victory.

This is Bangladesh’s sixth win in Test cricket outside their home country, and the first against any of the top five-ranked teams. New Zealand is second and Bangladesh ninth in the Test rankings. With this win, he also broke New Zealand’s streak of being unbeaten in 17 consecutive Tests on his soil.

Former volleyball player Ibadat had taken 11 Test wickets at an average of 81 before this match. In the first innings, he took one wicket for 75 runs. New Zealand had scored 328 runs in the first innings. In the second innings, Ibadat broke the back of the Kiwi innings by dismissing Devon Conway (13), Henry Nicholls (0), Tom Blundell (0) and Will Young (69).

He dismissed Ross Taylor for 40 and then took the wicket of Kyle Jamieson to take New Zealand to 160 for seven. Taskin Ahmed sent Rachin Ravindra for 16 and Tim Southee to the pavilion without opening an account. Mehdi Hasan Miraj ended the Kiwi innings with Trent Boult caught by Taijul Islam at midwicket.